Over four gatherings in late April and early May, Topaz Camp residents brainstormed ideas on two large whiteboards about what they wanted the public/decision makers to know and what would make them feel cared about. Outreach workers from AVI set up the logistics for the meetings. Volunteers from Poverty Kills 2020 transcribed and compiled the contributions. These are the words of Topaz residents.

We live at the tent city at Topaz Park. We came here when government told us to move here in early April, because this was their approved tenting site. Then they changed their minds on April 25 and told us they’re shutting down the tent city.

Some of us have been brainstorming ideas about what we want. There is commUNITY here. We can’t speak for everyone, everyone’s situation is different. But these are the things we want government, media, and the public to know about our situation. Other people living here and at other sites should also have the chance to speak up and be heard.

Stop making assumptions about us

We reflect what you’re scared of.

COVID has made housed people’s fear way worse. They are afraid for themselves, for everyone except for people living on the street or in a car. They’re not afraid for us, they’re afraid of us.

People on Pandora are getting harassed, stuff thrown at them, tents slashed. Who should be scared of who?

Don’t judge us, you don’t know our stories. We have family. We care about each other. You should give your head a shake if you haven’t experienced this firsthand.

Government says they’re shutting down the tent city because it’s not safe. But for some of us this is the safest place we’ve been. It’s healing, because of the care and empathy of the residents & the coalition that runs Topaz. Everyone here shares a common pain of being an outsider, and our shared experience has created a community. We get more help from each other than the system.

Stop policing Topaz. This is an intense triggering environment, to be living behind fences and constantly being watched. People here need privacy, respect, and safety. We need a chill atmosphere.

Many of us still have nowhere to go

The May deadline is impossible and has many of us stressed and worried. A couple days ago BC Housing gave us a handout that says “People have to move out of the camps. Outreach workers are offering people places they can move to. The government will not force anyone to leave until everyone in each camp has been offered a safer place to live.”

But most people here have NOT been offered a hotel room – there’s lots of talk but no action! We don’t even know what the process is! We deserve to know what is going on.

The placement process is messed up, there are people in tents & sick who need rooms. It’s a bad process, and hasn’t prioritized people’s needs. BC Housing needs to come back, there are lots of people on disability who haven’t been offered a room.

Some of us are living out here with no tents, or having to share other people’s tents. They’re not giving us tents if ours are taken down or get stolen. As part of clearing the camp they are throwing out people’s tents if they think we’ve left Topaz. Sometimes they throw out tents with our belongings inside.

Lots of us aren’t even on the list yet for hotels and nobody will tell us for sure who is and isn’t on the list.

There are spaces out there, but people are still here at Topaz. Why?!

Some of the motels aren’t good for people with mobility issues. What happens to people in that situation?

Some of us don’t feel safe at any proposed option, where do we go? People need more options for housing, including helping people who need some space from Victoria.

Some of us want to stay at Topaz. We don’t want you to close Topaz, we want year-round camping. LET US STAY! It’s been good at Topaz, feels like community. At the very least Topaz needs to stay open until everyone has been offered a proper place. We were in a shelter, then they sent us here, now it’s back to a shelter. Leaving people here is no more expensive than housing us, might even be cheaper. It’s easier to keep in contact here with service providers etc.

Temporary shelters are not the same as housing

WE NEED HOUSING! There should have been housing before COVID! Why did it take COVID to make people pay attention?

Finding a place to live is impossible. Why is there no cap on rent prices? $1,350 before utilities is too much! There are so many overpriced apartments sitting empty for multiple months. That should not be allowed! There should be some units in every apartment building reserved for subsidized housing and BC Housing should help with the cost of rent for people on disability.

The rules we are told to follow to get housing are unfair and there are long waitlists. BC Housing told one of us to downsize and get rid of a pet in order to get a place, six months before they actually helped.

Some of us came here from recovery programs for people who use drugs. They call it transitional housing but really it’s just a short-term shelter that we have to pay to live in, it’s not real housing. In one building run by the Portland Hotel Society all programs were cancelled due to COVID-19, we have less food and the common rooms are closed, but we were still paying full program fees, $1,000/month! What about our rights? BC Housing is doing NOTHING for us! And it makes no sense. BC Housing should help people exit from supportive recovery programs into real housing, so that we aren’t stuck in a 4 month “program” for over a year (this is the norm) and so more spaces become available in the program for people wanting help with recovery.

We need these temporary hotels to become permanent housing for those on disability. We need long-term housing not temporary solutions. And that housing needs to be run by us, in ways that respect our rights.

We know how to look after each other

The government keeps saying that we can’t be housed unless there are services in the building. But nobody’s asking us what we need and how we want things to be set up.

The stigma surrounding drug use is costing people’s lives. It’s not only people who are homeless who use drugs, most overdoses happen in people’s private homes. Yes we need overdose prevention, everybody does, housed or homeless. In April people died here from overdose. But in April people died in their homes too from overdose. Housed people could learn a lot from us about how we look after each other and fight stigma.

Service providers need to communicate better with each other, and ask us how to do things. We think you should separate things by different factions in the street community, for example drug use / booze etc., then the services can coordinate easier.

Many people have been left behind in this plan. Spaces are only offered to people living here at Topaz, or Pandora. It’s not fair that people living in other spots aren’t getting anything.

For some people a motel room isn’t workable. Some people feel they will be better off in a car or living outside. But there’s nothing for people living in cars or vans. People’s tires are getting slashed and they have no showers.

What about people who are still outside, how will we be supported? Tenting and binning gives us some things, like a chance to buy some food. But showers and laundry are so important. What’s the plan? People outside haven’t had laundry for 7 weeks!!!

We need outreach for people becoming homeless for the first time/again.

What we want you to do

The most important things to us right now:

When we move into motel and hotel rooms we need:

We will be writing more as things unfold and we expect to be taken seriously and listened to. We deserve to be treated with respect.

Below are photos of some of the white boards we used to brainstorm our thoughts and write this article. 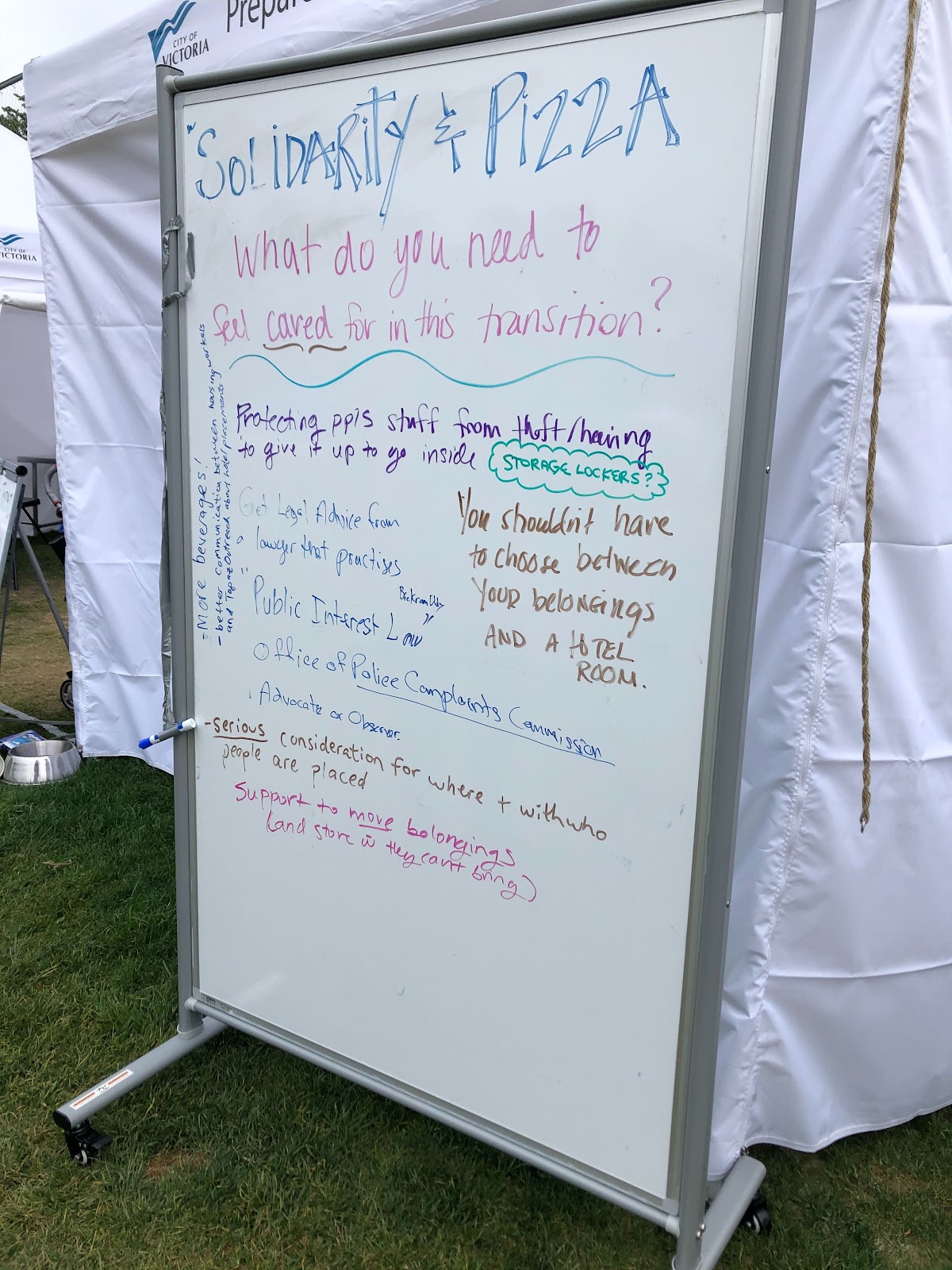 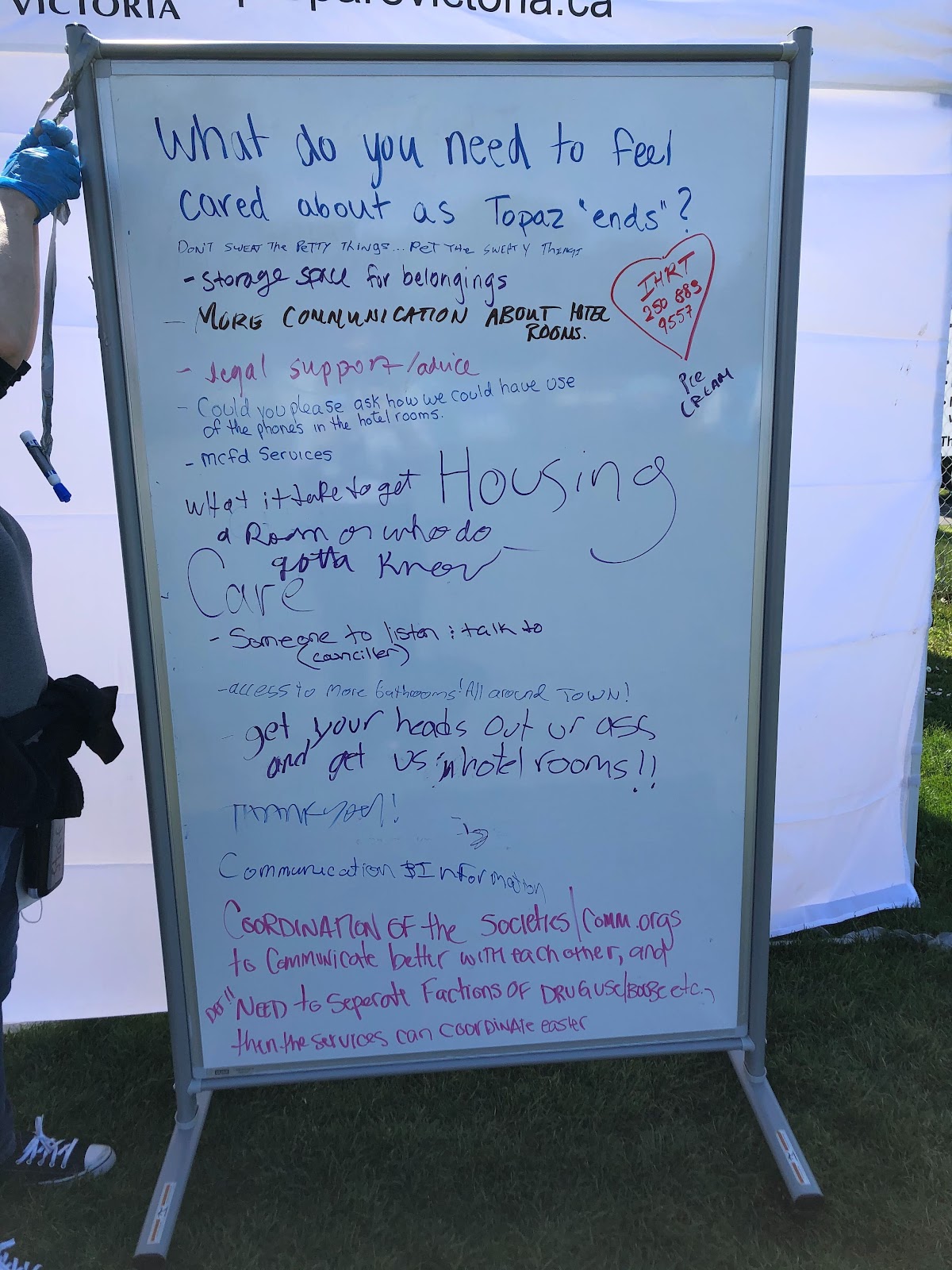 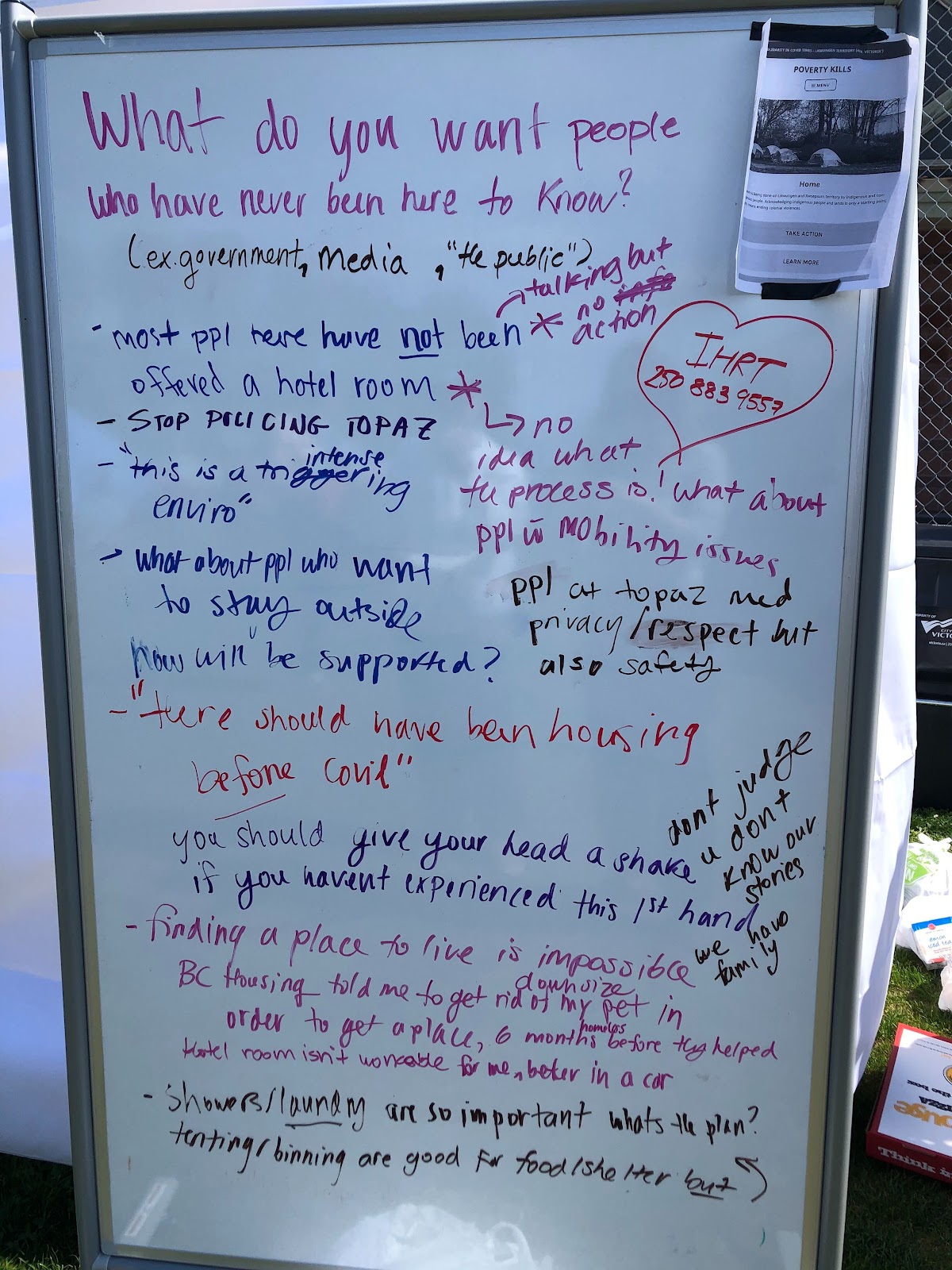 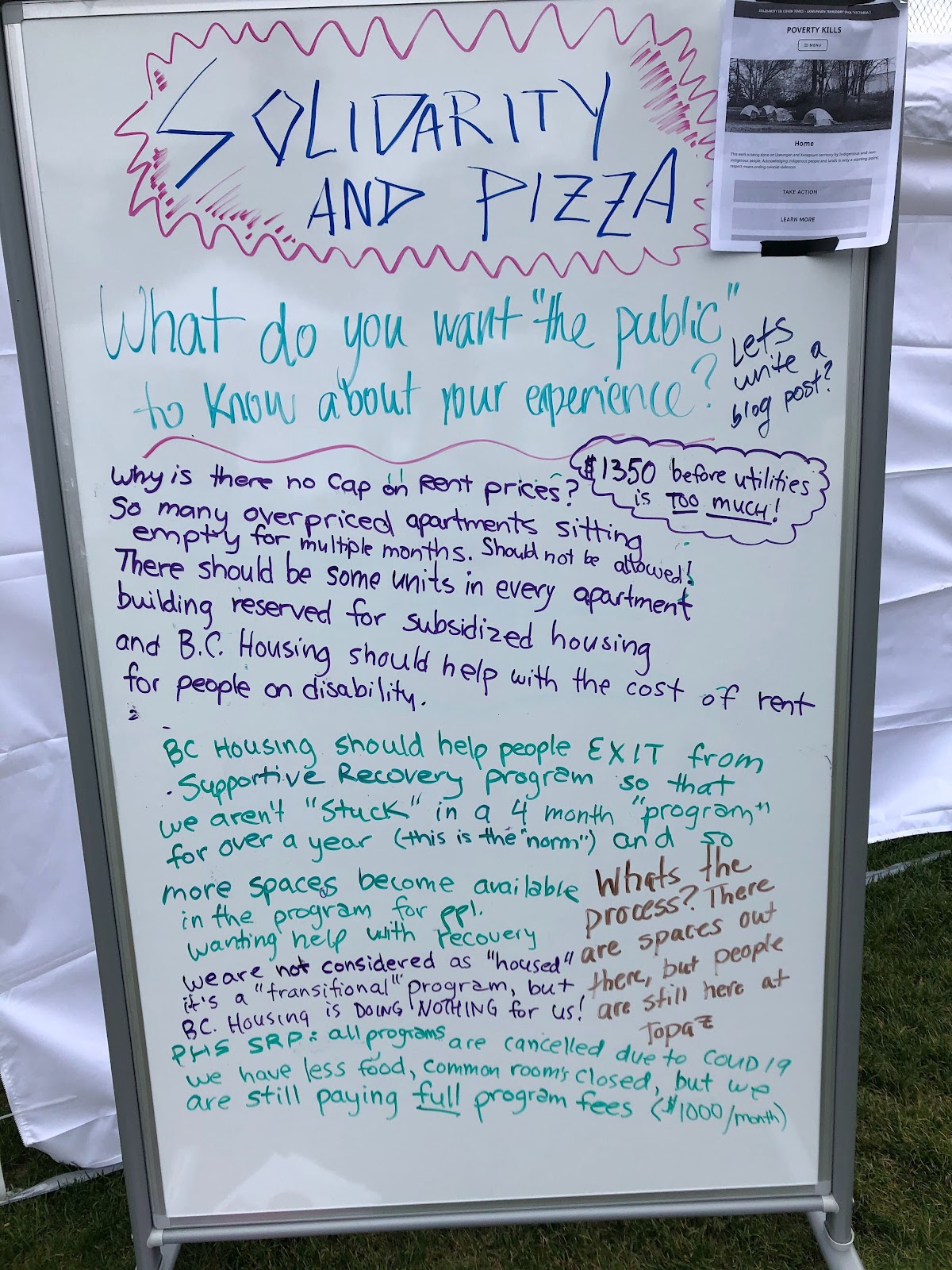 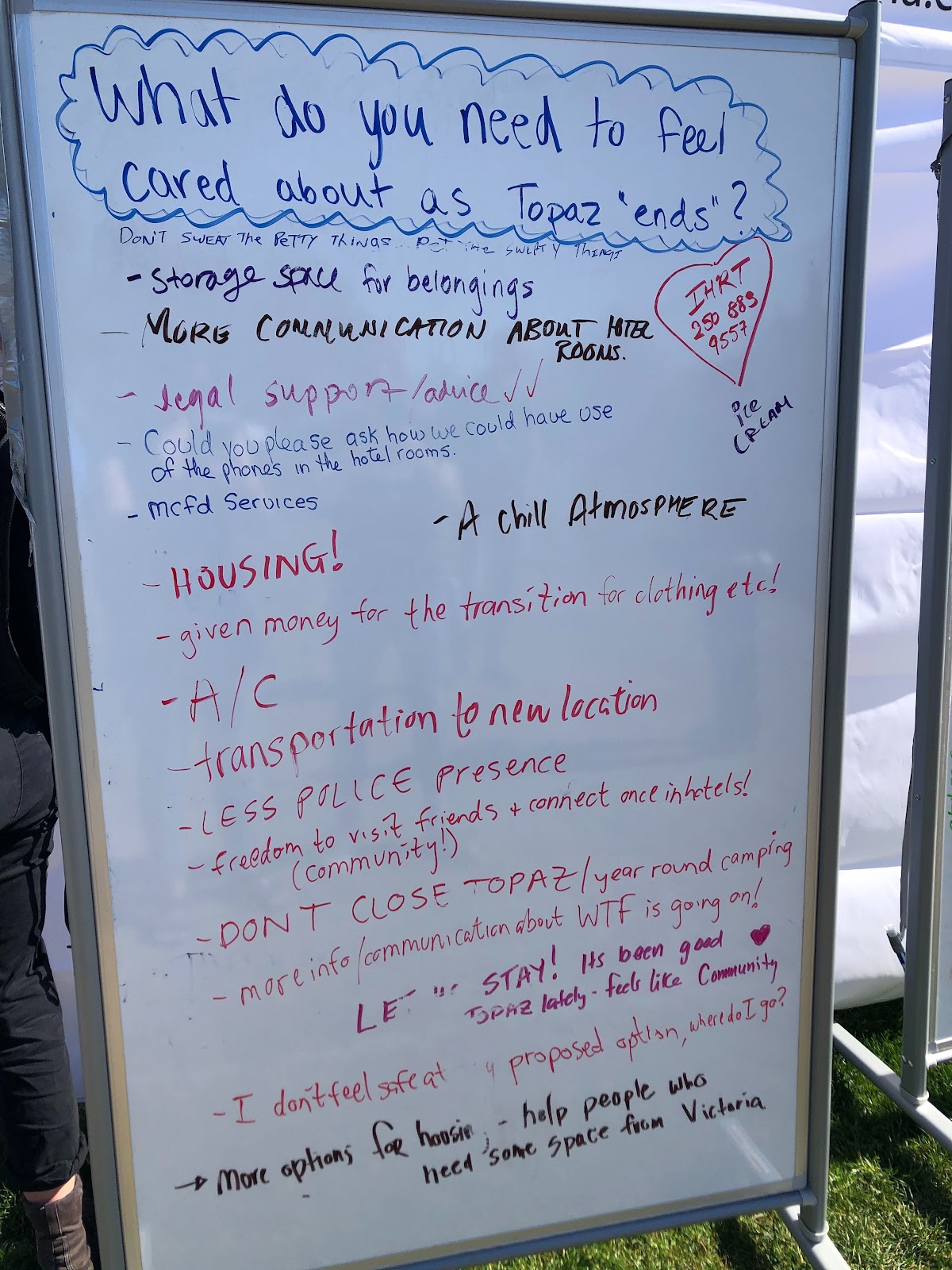 9 thoughts on “The Talk From Topaz: Where do we go from here? By Topaz Residents”

This site uses Akismet to reduce spam. Learn how your comment data is processed.